Since our posts on footwraps and jackboots, Lean Solid Dogs has been flooded with queries from peace-loving people of all fraternal nations. In response, I conducted harsh field trials on the Russian-style jackboots and footwraps, equipment worth over $20.05, assuming a value of one nickel for the remnants of my old pillowcase. Nothing but the best for you, dear readers! 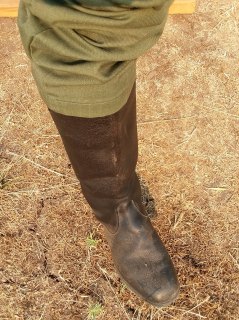 To me they still look like I should be rounding up Polish hostages.

I’d been told that where jackboots and footwraps excel is in water and damp. However, I had doubts. Sure, jackboots have high sides, and no doubt some of them are well sealed too. But it seemed like once they did flood, you would be doomed and your feet stuck for your whole walk in knee-high water buckets. At the recent GORUCK challenge, I’d chosen exactly the opposite strategy, wearing a second-hand pair of “Moab Ventilators,” so named because of the mesh sides intended to let water drain out like from scuppers on a ship’s deck. But whatever the designers’ intended, the Moabs stayed wet all night, encrusted on the outside with a thin cement of caked-on sand and moistened from the inside by my waterlogged wool socks.

And just as Krushchev predicted, the Communist jackboots buried their pricey, effete capitalist counterparts. I tried to flood them all the way and could not! First I stood in a creek up to my ankles, patiently waiting for water to find its way through the seal, but it never did. Impressed, I knelt down in the creek hoping that water would rush over the boot tops like Soviet tanks through the Fulda Gap. Still no joy. As I have mentioned before, the portyanki are so long (90cm/36”) that you wind half the fabric around your calves, and to my amazement this sealed the boot tops so thickly that water could not cascade in. I had to wiggle and fishtail around, trying to coax water into the jackboots, til after about 30 seconds I had to be satisfied with getting my feet about 40% soaked. 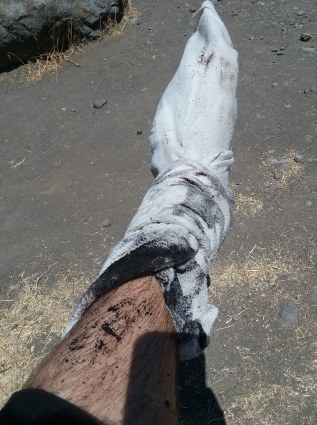 See the ring of creek filth around the calf? The portyanki created a thick cloth seal there that kept out the dirt, and most of the water too.

I walked the next mile that way and found it perfectly satisfactory. I had wondered whether water would continue to drip down my calf and slowly make a sopping, sucking fishbowl around my feet, but this never happened. Either the footwraps pack up all the loose space around your feet and leave little room for water to gather, or as Lars from Survival Russia suggests, maybe the footwraps really do wick it up and out.

Certainly I was amazed at how well the wraps dried out. After a mile, I stopped to turn the wraps around. This is something that portyanki fans like Lars are always try to sell you on: “Instead of changing into dry socks,” they’ll say, “you can turn portyanki around and wrap your feet from the other, drier end. The wet end will get a chance to dry out, now being wrapped around your calf or even sticking out your boot top. It’s like having a dry pair of socks built right in.” Without impugning Lars’ integrity, I must confess I thought that sounded almost as fishy as Lenin’s “democratic centralism,” but he was right. After a mile, not only had the top end of my footwraps dried enough to be comfortable, they were also drier than my pant legs, which were directly exposed to the air!

Turned around, re-wrapped, and almost as good as dry socks. The wet end is now poking out the top.

Score one for East then. No, the footwraps did not dry out completely until I took them off at home and hung them up, but now I was inspired to try some serious Marxist science. I soaked the portyanki and my favorite wool socks and hung them in the sun, side by side to make a fair trial, but the outcome was never in doubt. Unsurprisingly the thin, single-ply footwraps with their huge surface area dried in half the time.

So will I seriously wear these things in place of hiking boots? I certainly would in wet muck. I might even wear them on other terrain just for the fun of doing things the old-fashioned way, just like I prefer to shoot revolvers. Loyal readers of this blog know that I am a sucker for the seductions of kludgy but ingeniously designed Communist gear, and friends know that I suffer from Ostalgie, an aesthetic nostalgia for the lost world of the socialist Eastern Bloc. The city of my young adulthood was an actual Stalinist metropole, and it left me with a sentimental fondness for the blocky, heavy, dim, cheap, kitschy material culture and aesthetic that—as far as I can tell—originated in Moscow and was exported to all corners of the Second World as part of what might be called the “Stalinist cultural package.”

Jokes aside, let me be clear: Lenin, Stalin, and the state they made were evil, an evil unsurpassed in the 20thcentury, and it’s bizarre that they get a pass from so many bien-pensants in the West. I’m just saying that if (Heaven forbid) I were going to conquer and enslave half the peoples of Europe, I would definitely consider doing it in actual Communist jackboots.

Published by Dog in Chief

The Dog in Chief writes about the flourishing of embodied souls. In practice, that means a lot of content about exercise, the outdoors, strength, and the comedy of errors called cultivating character and happiness. In his innermost life, the Dog is a serious Buddhist--crappy and disobedient, but still very serious--and writes about such things professionally. In this blog they are seldom at center stage, but they are usually nearby in the background. View all posts by Dog in Chief